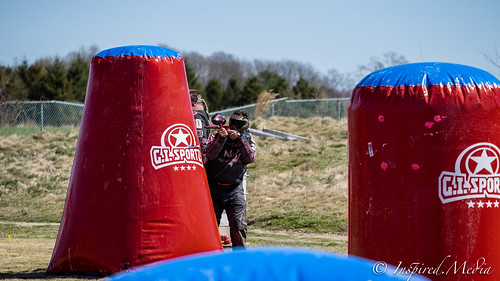 A paintball is a capsule of vegetable oil based dye, which comes in different colors and variations. It is used in a military type combat games consisting of teams. The players of the team have to eliminate the opposing players by shooting these paintballs at them. When a paintball hits a player he gets eliminated.

Paintballs are made in a unique way. They are basically gelatin capsules, which contain colored liquid. This paint or color liquid is safe as it is non-toxic, water soluble and biodegradable.

Paintballs weigh only a few grams and measure only 1.7 cm in diameter. When they hit a person, they burst and leave a splatter of paint on the person. The size of this splatter is about 13 cm.

Players use gas powered guns to shoot paintballs at each other. The use of paintballs provides the players with real time atmosphere and situations.

The history of Paintball
The history of paintball can be traced back into the early 1970’s. During this period paintball guns were mainly used as a tool for marking livestock and tress. Then in 1981, some 12 friends introduced paintball as a recreational game. They used industrial paintball guns. These twelve friends played this game for the first time on a field of over 100 acres. The game paintball was originally named as “the national survival game”.

Paintball-the evolution
It started with normal paintball guns and paintball, and the game was simple –hit each other and win. Since that time paintball has become popular all over the world. It has become a globally recognized recreational activity. The game has evolved and has become more sophisticated. Today people from all around the world form their teams set up international tournaments and leagues. There are continuous innovations happening in the construction of new games and fields of paintball.

With the growing number of paintball fans the paintball industry is also blooming. They are developing commercial paintball fields. In 1982, the first commercial outdoor paintball field was developed. Since then developments of new fields have kept paintball enthusiasts coming back for more fun and excitement.

Today there are prizes set up by organizations for the winning teams. The players keep on updating their paintball guns, with the advent of newer technologies.

The basic thing which sets this game apart from other games is the type of equipment involved. Not too many games involve such adept use of guns.

Capture the flag
It is a classic paintball game. This game includes two opposing teams. The teams have to acquire the opponent’s flag and hang their flag on a designated location. During this process, the players of the either team have to protect their own flag.

When this game is played in tournaments, it requires skills and intelligence. If a team eliminates all the players of the opposition, having none of their players eliminated and hangs the flag within the allotted time, they are said to have ‘maxed’ the opposition. The term ‘maxed’ implies that they have scored the maximum possible points that could be achieved in the game.

Center flag
This paintball game is similar to capture the flag. There is only one difference. The flag to be captured is hung in the centre of the field. The teams have captured that flag and hang it on a designated location. This designated location is somewhere on the opposition base.

Paintball has emerged as game of wits and strategies. It is becoming popular all over the world and is gaining an ever-growing fan base.