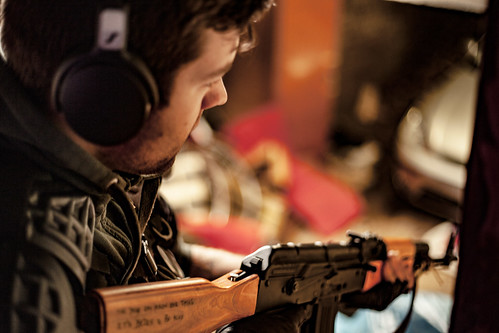 The advancement and progression of law enforcement and military exercises and training, in addition to military simulation and real action games, is taken into account in the design phase and manufacturing process of these military simulation paintball guns. Since most of these paintball markers are made for use in police and military training, the guns are made to be extremely durable and can withstand a lot of strain and any blows that might occur when out on the field.

Real Action Paintball offers a range of highly realistic paintball markers aimed at providing their customers an experience that is as close to truth as possible.
Real Action Paintball produced the first paintball gun that was made to look like the M4, a military assault rifle.
• RAP4 BB/Pellet Airgun
• RAP4 Blue Series
• MOD Pouches for the RAP4 Tactical Vest
• T68 M16 Iraqi Freedom Paintball Markers
• AP4 AK47 with METS Technology

Airgun Designs is the creator and producer of the Automag, the Minimag, E-Mag and other paintball guns. Airgun Designs’ paintball guns are available through exclusive dealers. They also produce gun parts and accessories such as bodies, adaptors, barrels and grip frames in addition to their paintball guns.
• M-41 C Pulse Rifle
• Players Series M-4 Carbine

Tippmann is one of the most established, well known and oldest names in the world of paintball. Tippmann produces a wide range of products relating to war games and scenario games, including Airsoft rifles, Airsoft pistols, and accessories for use in Airsoft, as well as markers and accessories for the game of paintball. One of Tippmann’s most widely used product is the Tippmann 98 Custom.
• A5 M4 Carbine
• A5 MP5
• A5 SD 5
• MP5 SD Conversion
• FN-FAL Assault Rifle
• M-4 Urban Tactical Carbine

Here are some great replicas of military weapons.

Heckler & Koch manufactures a range of firearms, including pistols, and has been doing so for the past 50 years.

This gun was used during the Vietnam War, developed to replace the water-cooled M1917.